Kelly aka Big Bird is a character that only appears in "Everybody Hates Big Bird ".

Big Bird (Mean Nickname given to her by the school bullies)

Kelly is awkward tall girl who got bullied by Joey Caruso and other students . She briefly dated Chris who she was friends with, but broke up with him after he refused to stand up to some football players when they insulted her after catching her kissing Chris in the boys locker room . The next day, Kelly completely changed her look after her mother took her to the mall to get a makeover. She angrily tells Chris she has no intention of forgiving him and rejects going on a date with him again . She says she's moving to Paris so Cindy Crawford can turn her into a supermodel. 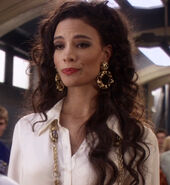 Kelly after her mom took her to the mall for a makeover .
Community content is available under CC-BY-SA unless otherwise noted.
Advertisement